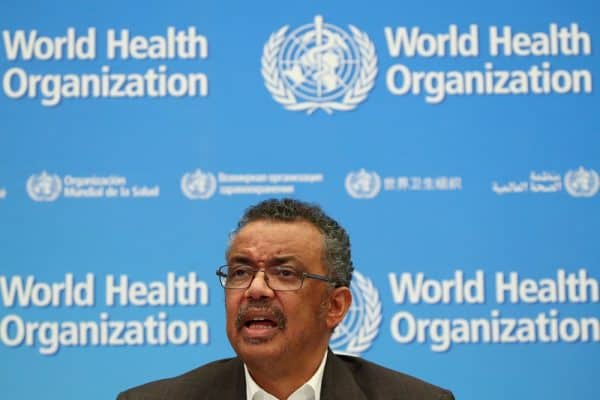 WHO declares Wuhan virus a global emergency but urges calm

KUALA LUMPUR,. The World Health Organisation (WHO) has declared the novel coronavirus (2019nCoV) outbreak a “global health emergency” after human to human transmission was reported outside China.

WHO director-general Dr Tedros Adhanom Ghebreyesus announced the decision after the international health agency’s Emergency Committee analysed the outbreak around the world since early this month.

“Let me be clear, this declaration is not a vote of no-confidence in China.

“Our greatest concern is the potential for the virus to spread to countries with weaker health systems,” he told a press conference in Geneva that was broadcast live in WHO’s Twitter feed.

WHO’s Emergency Committee is headed by Dr Didier Houssin of France and has been postponing the declaration for two weeks to get more information of the cases in China.

In the press conference, Dr Ghebreyesus repeatedly said that China is taking “extraordinary measures” to prevent the virus from spreading.

He urged the public to remain calm, stating that the WHO was not recommending “measures that unnecessarily interfere with international trade or travel.”

Since 2000, WHO has only applied the emergency designation five times including for the 2009 H1N1 swine flu, the 2014 polio and Ebola outbreaks and the 2016 Zika virus.

The last time WHO declared a global health emergency was in 2019 for the Ebola outbreak in eastern Congo that killed more than 2,000 people.

WHO today have also reported that at least 170 people are dead and more than 8,100 cases have been confirmed in mainland China.

There had also been 98 cases in 18 countries outside of China, but no deaths with eight cases of human-to-human infection — in Germany, Japan, Vietnam and the United States.

Malaysia has eight positive cases all of whom are Chinese nationals.

Malaysia have stopped flights to and from Wuhan last week while the Home Ministry confirmed that fourteen tourists from Wuhan, China, who arrived in this country via Kuala Lumpur International Airport (KLIA) on Jan 28 has also been sent home.

Prime Minister Tun Dr Mahathir Mohamad said the government is looking to bring 78 Malaysia citizens who are currently in Wuhan home with Defence Minister Mohamad Sabu confirming that the Malaysian Armed Forces (ATM) aircraft is ready for the operation.

France: EU agrees a carbon levy on all imports