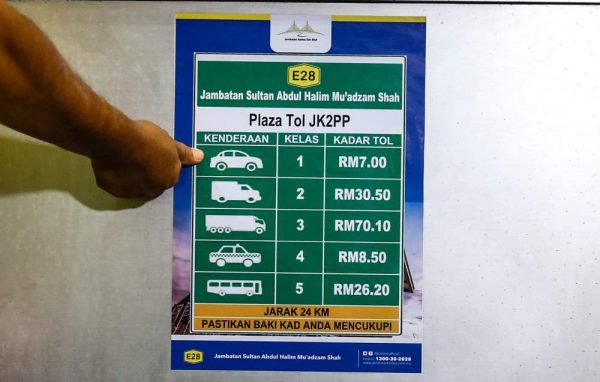 BATU KAWAN,. The toll rate for private cars at the Sultan Abdul Halim Mu’adzam Shah Bridge (JSAHMS) has been reduced from RM8.50 to RM7.00, bringing it in line with the rate charged at Penang Bridge.

The price reduction which takes effect at 12.01am on January 1 was announced by Finance Minister Lim Guan Eng when tabling Budget 2020 in Parliament on October 11, as part of the government’s efforts to reduce the cost of living and improve the quality of life of the people.

Datuk Seri Farizan Darus, a board member of JSAHMS concessionaire, Jambatan Kedua Sdn Bhd (JKSB), said it is hoped the streamlining of the rates would reduce congestion on Penang Bridge, with more users opting to use JSAHMS.

“In addition, road users who want to go to the island, especially from the south, will switch to JSAHMS for a smoother, more comfortable and safer ride as the bridge has never experienced any congestion since it was opened since 2014,” he said after the launching event of the new toll tariff here tonight.

He said since JSAHMS was opened, some 32.6 million vehicles had used the bridge with an average annual increase of about 32 per cent.

Meanwhile, road users responded positively to the initiative as they were able to reduce costs by using the second bridge.

“I can reduce toll and petrol expenses, as JSAHMS is closer to my home and there is less traffic congestion,” said Mohd Ridzuan Kamarudin, 45, who works in Bayan Lepas. ― Bernama