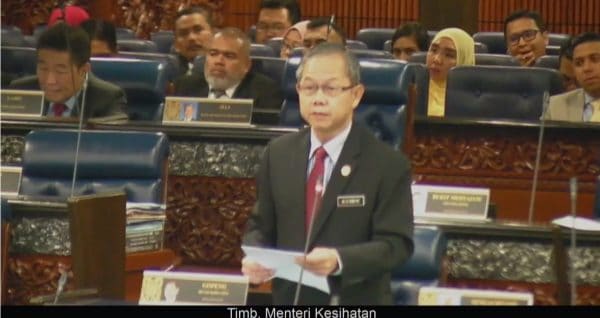 Deputy minister: 356 suicide cases recorded from 2014 till June this year

KUALA LUMPUR,. From 2014 till June this year, there were 356 suicide cases on record in the country.

“To face this problem, KKM (the Health Ministry) has made available screening services and treatment for people with mental health issues at 60 government hospitals, 1,001 health clinics where the service is at the primary level and at 25 Community Mental Health Centres,” he said during the oral Question-and-Answer Session in the Dewan Rakyat today.

He was replying to a question from RSN Rayer (PH-Jelutong) who wanted to know the steps the ministry was taking to tackle the problem of suicide in view of the increasing number cases in the country lately.

Dr Lee added that KKM had 400 psychiatrists who were stationed at the ministry’s facilities and 298 family medicine specialists for counselling on treatment for those suffering depression.

Dr Lee said among other activities the ministry was taking to address the problem is the Healthy Lifestyle Campaign which focuses on tackling stress.

Replying to a supplementary question from Dr Kelvin Yii Lee Wuen (PH-Bandar Kuching) on when the suicide registry will be up, he said the ministry planned to do it next year.

“Before the registry is drawn up, we have to decriminalise suicide attempts because if we don’t do this, there will be under reporting which will result in the registry being incomplete.

“We are not just supporting decriminalising suicide because of the registry, but because we do not want those who attempt suicide and need treatment, to be punished twice,” he said.

Sections 305 and 306 relate to abetment of suicide while 309 spells out the punishment for attempted suicide, which is imprisonment up to one year, or with fine, or with both.

The government is currently engaging the relevant parties to amend existing laws to decriminalise suicide. ― Bernama